Nowadays, most car manufacturers are thinking about protecting the environment, and that’s why lots of companies such as Mercedes Benz or Porsche are looking into electric vehicles.

Mercedes Benz Vision EQS is the latest vehicle from Mercedes Benz and it brings in a genuine focus on protecting the environment while also bringing in sustainability as well.

What is the Mercedes Benz Vision EQS?

The car is an electric sedan concept for now and it was revealed at the Frankfurt Motor show. What makes the car unique is that despite being an electric vehicle, it also has a real focus on sustainability and that makes this concept extremely interesting and also unique at the same time.

They want to reach that point of carbon neutrality, and with this car model, they are incredibly close to achieving such a goal.

When it comes to the interior, the Mercedes Benz Vision EQS stands out since it has beautiful contours and swept lines very similar to an expensive yacht. The leather is artificial, the headliner is made out of plastic and the maple wood trim is acquired from forests that are focused on lowering the carbon footprints. The dashboard for this vehicle is downright amazing, it even has some vertical vents and a few wood stripes which are very interesting and also quite unique to look at.

Since it’s a futuristic car you are also getting a large screen at the center of the console, yet each door armrest has a small screen. You can log in to the Mercedes Me service to access any personal features and ideas. 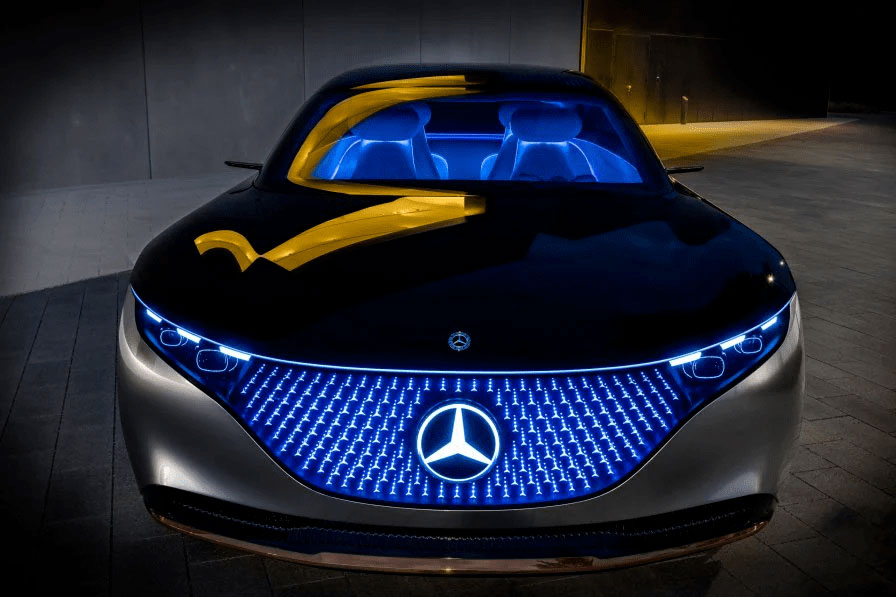 The Mercedes Benz Vision EQS also looks extraordinary on the outside. It has a log-in combination of grille and headlights, with the later ones, have 940 LEDs arranged in a stunning 3D display to make everything stand out and nothing short of amazing.

In fact, each one of the headlights is coming with its own four holographic lenses, so they can create holograms or show some static images. It’s a very original and distinctive feature with fresh ideas.

In regards to the shape, you have one similar to a four-door coupe, but creative and visually interesting. On top of that, you have the taillights that aren’t lights, instead, there are 229 different cutouts as a 3 point star, and each one of these is LED.

Mercedes Benz Vision EQS has 2 electric motors, and on top of that, it generates around 469 horsepower. It also brings in 560-pound feet of torque. So you can go to 60 mph in just 4.5 seconds, which is impressive for an electric car.

On top of that, the battery is Li-Ion and it supports up to 435 miles in total. That’s a decent range for a vehicle like this. Some of these battery cells are created with renewable resources, which is a significant plus in a situation like this.

Moreover, this vehicle is set to get past the concept state and eventually become a car we will see on the road soon after the EQC crossover.

It’s not clear when this will happen, but the potential is there, and we couldn’t be more excited for the future at this point.

Apple Watch Series 5 is finally here and it’s bringing in some pretty interesting...